Gustav A. SMITHBURG, who served his adopted country faithfully during the late war and is now a progressive farmer of Lockridge Township, Jefferson County, residing on section 21, is of Swedish birth, his parents being Peter and Annie SMITHBURG. His father, also a native of Sweden, learned the trade of a coppersmith in his youth and carried on that business in connection with farming. The lady whom he married was a widow and by her former union had two children. A family of six children was born of her second marriage, as follows: Inga Peck, now living in Blakesburg, Iowa; Charles, deceased; Sophia, widow of O. GUNDERSON, of Portland, Ore.; David, who served as Corporal of Company M, Fourth Iowa Cavalry, died soon after the close of the war from wounds received while in the service; Gustav A. is the next younger; and Bertha, wife of Lewis MENDENHALL, of Fairfield, completes the family.

In 1848, through the instrumentality of Peter Cassel, whose sketch appears elsewhere in this work, a colony of Swedish emigrants was formed, among which was the family of Mr. SMITHBURG. The party crossed the ocean together and all sought homes in this vicinity. Mr. SMITHBURG purchased one hundred and sixty acres of land, the present farm of our subject, but at that time only thirty acres had been cleared while a log cabin constituted the entire improvements. He arrived with his family in August and two weeks later while crossing Brush Creek with a yoke of cattle, to get lumber for repairing his house, he was drowned. The mother kept her family together and with the aid of her sons, improved the farm. Some ten years later she married Philip ANDERSON and her death occurred in 1870. Mr. SMITHBURG was a member of the Lutheran Church as was also his wife for many years, but in later life she united with the Methodist Episcopal Church.

Our subject was a lad of six summers when as a member of the Swedish colony before mentioned, he crossed the broad Atlantic and became a resident of Jefferson County. He was reared to manhood on the farm which is yet his home and in his youth acquired a common school education and shared in the difficult task of developing from the wild land a productive farm. He was only nineteen years of age when the Civil War broke out, but anxious to strike a blow against the rebellion, he responded to the President's call for troops and on the 25th of November, 1861, became a member of the Fourth Iowa Cavalry, in which he served three years and ten months. During the winter of 1861-62, the regiment remained at Mt. Pleasant, but the following spring was sent to the front and during the period in which he wore the blue he saw service in Missouri, Arkansas, Mississippi, Georgia, Alabama, Louisiana and Kentucky. He participated in the battles of Arkansas Post, Vicksburg, Jackson, Miss., and the Guntown raid, was in the battle of Tupelo and followed Price on his raid through Missouri. The regiment once traveled one hundred and twenty-four miles in thirty-six hours and made three charges. He continued with his command until the war was over, when he was honorably discharged as a loyal soldier and a faithful adherent of the Union cause.

The year succeeding his return from the field, Mr. SMITHBURG spent in Galesburg, Ill., after which he returned to Iowa, and made a location on his present farm which has now been his home for twenty-three consecutive years. On the 20th of December, 1868, he married Miss Christina ANDERSON and unto them have been born eight children. The two eldest are deceased, those living are: Elmer M., and Elma, twins, born October 17, 1874; Bertha, January 29, 1878; Ralph, October 25, 1882; Walter, March 12, 1884; Minnie, June 21, 1887. Mrs. SMITHBURG is a member of the Methodist Episcopal Church and a most estimable lady. Her husband although not holding membership is generous with his means in support of the church and gives liberally for all charitable and benevolent interests. As a business man, he is successful, having by industry and enterprise gained a comfortable competency and by fair and honest dealing secured the confidence and regard of all with whom he has come in contact. His farm comprises one hundred and sixty acres of highly cultivated land, which is furnished with good grades of stock and all necessary improvements. His barns and outbuildings are such as should be seen on a model farm of the nineteenth century, and his home is an elegant and commodious residence, tastefully furnished. Mr. SMITHBURG cast his first vote when only nineteen years of age for President Lincoln, and has since been a stanch supporter of the Republican party. He has frequently represented his township in the county conventions, and for two or three terms served as Township Trustee. An honored veteran of the late war, a representative farmer and valued citizen, are terms which aptly describe the gentleman whose name heads this sketch. 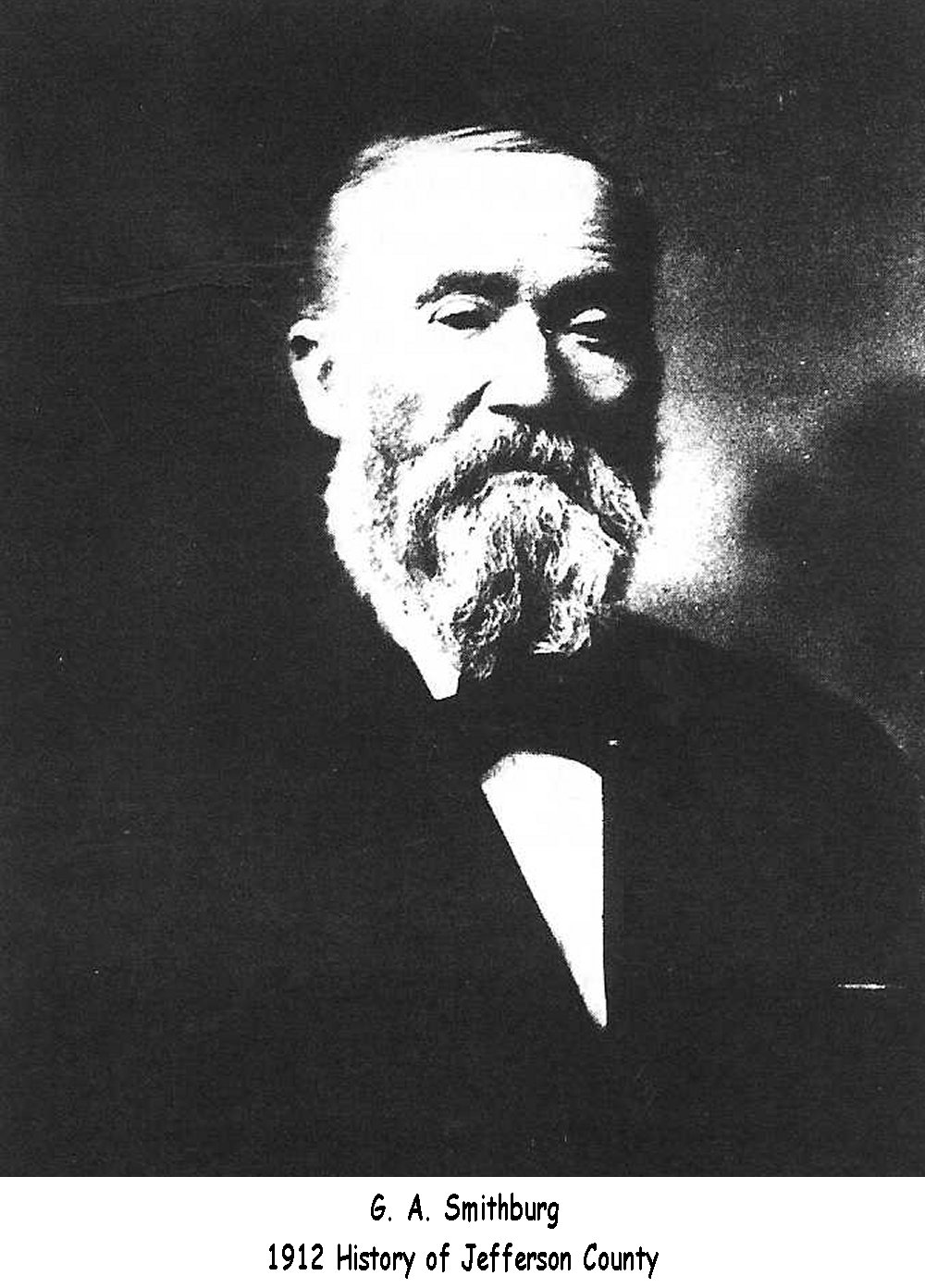