James A. GALLIHER, of Fairfield, has resided in Jefferson County for a longer period than almost any of its citizens now living. He has ever ranked among its leading and influential men and in various official capacities has attested his worth as a citizen and his desire to aid in the progress of all that would benefit the community.

The life record of Mr. GALLIHER is as follows: His birth occurred in Fleming County, Ky., May 4, 1811, and in his native State he was reared to manhood. But before proceeding farther it would be well to mention something about the origin of the GALLIHER family which was founded in America by the grandfather of our subject, a gentleman of Irish birth, who accompanied by his wife, a lady of Scotch (sic) descent, left the Emerald Isle and sailed for the New World. Having arrived at their destination they settled in Fleming County, Ky., where was born unto them a son to whom they gave the name of James. On reaching manhood he married Eleanor BLACKBURN, who was a native of Maryland and with her parents emigrated to Fleming County, Ky., among its early settlers. James GALLIHER was a farmer by occupation and followed that business throughout the greater part of his life. He enlisted in the War of 1812 with three of his brothers, and he and two brothers were killed in a battle with the Indians on the river Raisen and the other brother who escaped with his life, was seven times wounded. The family left to mourn the loss of the father consisted of six children, five sons and a daughter, but our subject is the only one who now survives. His mother spent her last days at his home in this county, passing away in 1856. She was a consistent member of the Methodist Episcopal Church and her example impressed itself upon the minds of her children, never to be effaced.

James A. GALLIHER was the fifth in order of birth in the family and was but two years of age at the time of his father's death. No property of any amount being left, at an early age he was forced to begin life for himself and in consequence his educational advantages were very limited, being confined to about eight months attendance at the common schools. Having worked for his mother until 1830, he was then married to Hannah McKEE, a native of Fleming County, Ky., their union being celebrated March 18, 1830. He followed farming in his native State until 1832, when with his family he removed to Vermilion County, Ill., where he made his first purchase of land -- a tract of one hundred and twenty acres. Thinking it would be to his advantage to seek a home further westward, in 1838 he came to Jefferson County and at the first land sale in Iowa, made purchase of a quarter section. He also entered a like amount, after which he returned to Illinois. His first wife had died on July 11, 1836, and on December 17, 1839, he wedded Melinda B. ANDERSON, a native of Bourbon County, Ky., born September 19, 1810. In August, 1840, he brought his family to the new home, locating on his farm in Cedar Township. In looking abroad over the country to-day one can scarcely realize what was its condition fifty years ago. Where now appear waving fields of grain, wild and uncultivated prairies stretched away into the distance; flourishing towns of considerable importance were not yet in existence and the entire region round about was almost an unbroken wilderness. Perhaps our readers may gain some idea of the condition of things at that day by a description of the way in which Mr. GALLIHER and his family spent the first few years after their arrival. No houses could be rented and they cooked by a log and slept in a wagon until Mr. GALLIHER could prepare logs for building a cabin. He invited all within reach to assist him at the "raising" and the invitations were all responded to, but the entire company numbered only five. The house was 18x18 feet yet many of the happiest hours of the life of our subject were passed beneath that humble roof. At length the pioneer home was replaced by a commodious brick residence in which he lived until his removal to Fairfield in 1888. Hardships and difficulties incident to pioneer life were common to all in that early day and Mr. GALLIHER and his family did not escape the general rule, but overcoming such disadvantages, success at length smiled upon his efforts and he is now in comfortable circumstances having a competency which enables him to live a retired life.

From the time when he cast his first vote for Andrew Jackson, Mr. GALLIHER has never wavered in his support to the Democratic party, but feels an abiding interest in its welfare and success. As before stated, he has long served in positions of public trust, his official career covering a period of twenty-eight years, which would have been further extended had he so desired. This fact indicates his efficiency and ability as an officer and is a better testimonial than words of praise. For eighteen years he was Justice of the Peace, for two and a half years he served as Sheriff and for seven years occupied the position of County Trustee. He and his wife were long associated with the Methodist Church but becoming dissatisfied with the stand which the church took in regard to the war, withdrew from membership. He is a member of the Old Settlers' Society.

By his first wife Mr. GALLIHER had two children, namely: Hester J., now the widow of Peter FISHER, and Sarah E., wife of Nathaniel YOUNG, a farmer of Adair County, Iowa. By the present union eight children have been born, Melinda, B., deceased wife of William TEMPLETON; James A., who died in his nineteenth year; Catherine A., wife of H. TEMPLETON; Esther who died at the age of three years; Theresa, second wife of William TEMPLETON; George W. who died in infancy; Samantha, wife of Perry GREEN, and Eveline S. who died at the age of two years. 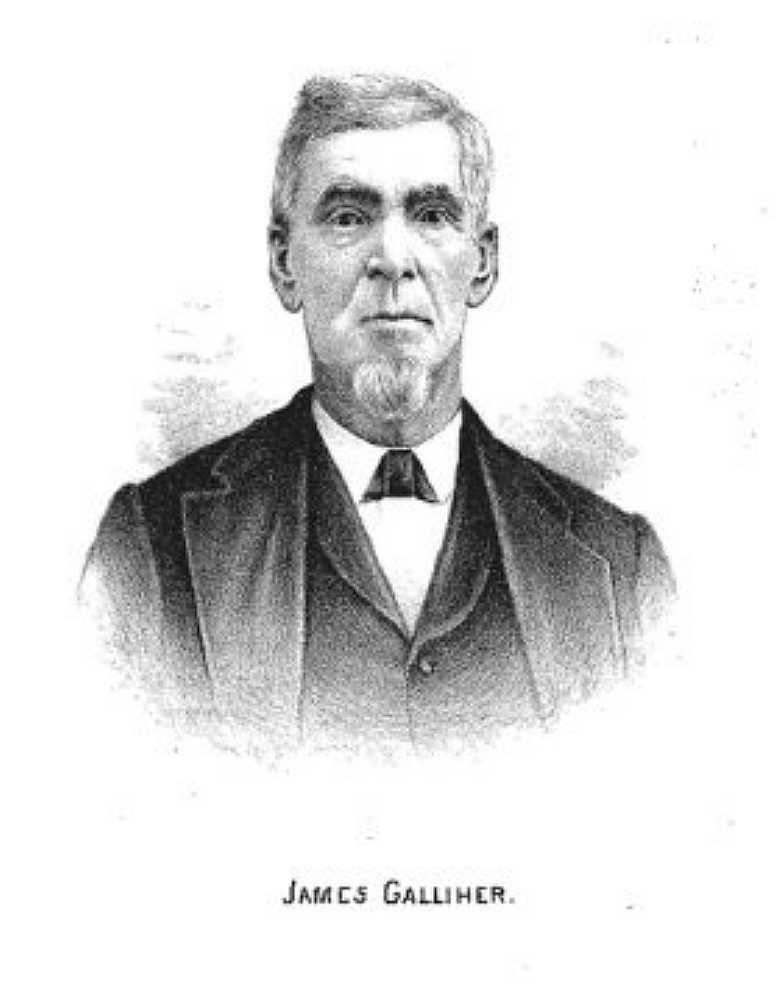