One of the highly esteemed pioneer residents of Batavia was the late Dr. Milton D. BALDRIDGE, who for fifty years was identified with the medical fraternity of Jefferson county. He was born in Guernsey county, Ohio, on July 11, 1826, being a son of Dr. John BALDRIDGE.

Early having decided to adopt the medical profession for his life vocation, while yet a lad Milton D. BALDRIDGE began studying with his father. After the completion of his preliminary education he entered the Cincinnati Medical College, from which institution he was graduated with the degree of M. D. in the winter of 1848-9. He immediately engaged in practicing, in addition to which in 1856 he was also identified with the mercantile business. The following year, however, he came to Jefferson county, settling in Batavia, where he devoted his entire attention to professional practice until his death on the 1st of June, 1907.

Dr. BALDRIDGE was twice married, his first union having been with Miss Isabella A. ALEXANDER in 1851. Mrs. BALDRIDGE was born in Lebanon, Ohio, in 1826, and died in Jefferson county, Iowa. On the 22d of September, 1877, Dr. BALDRIDGE was again married to Miss Nancy HITE, a native of this county, her birth having occurred in the vicinity of Brookville in 1847. Mrs. BALDRIDGE is a daughter of Henry and Mary (MOBLEY) HITE, the father a native of Richmond and the mother of Washington county, Virginia. They came to Iowa in 1845, locating on a farm near Brookville, where the mother passed away in 1902, the father, however, survived until 1905. Dr. BALDRIDGE and his second wife were the parents of two sons, John Henry, who is the elder, is a well known physician and surgeon of Batavia. He obtained his preliminary education in the common and high schools of Batavia, after which he took a commercial course in the Business College at Quincy, Illinois. His professional studies were pursued in the Medical College at Keokuk, this state, where he was awarded the degree of M. D. with the class of 1906. Returning home he entered in practice with his father with whom he continued to be identified until the latter's death. He has been very successful, being well adapted to the profession he is following, and has a most lucrative practice. He married Miss May RENO, a daughter of Willis and Mary RENO, also residents of Batavia, the father being a well known retired farmer of Wapello county, who recently located here. Two children have been born to Dr. and Mrs. BALDRIDGE, Helen and Willis. Milton BALDRIDGE, who was named for his father, is living on the old family homestead with his mother. He acquired his education in the school for the deaf, at Council Bluffs, Iowa, of which he is a graduate. His energies have always been devoted to agricultural pursuits and he is now operating his mother's farm of forty acres, located near the village of Batavia. He married Miss Emma DORN, of Waterloo, Iowa, and they have one child, Waldo.

The late Dr. BALDRIDGE was an earnest member of the Masonic fraternity, in which organization he had attained high rank. He was a member of Batavia Lodge, No. 198, A. F. & A. M., and he was also a Knight Templar, being identified with an Ottumwa lodge, and belonged to the Shrine of Davenport. His political support he gave to the republican party and always took an active interest in the workings of the party. He was highly esteemed in Batavia professionally and privately, having, during the half century of his residence here, demonstrated his high principles and worth in all of his relations of life. 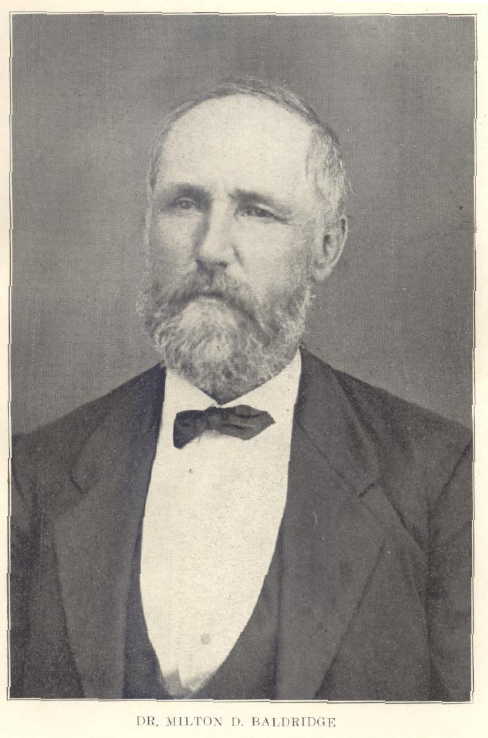