Evelyn Haight, 94, of Cresco, Iowa passed away on October 21, 2014 at the Patty Elwood Center in Cresco, Iowa. Evelyn was born on January 9, 1920 in Des Moines, Iowa to William and Beatrice (Shelton) Thomas, one of a set of twin girls. Throughout growing up, she and her sister were very close. They participated together in performing musical selections on the piano, and tap-dancing as well. Following graduation from high school, she studied Home Economics at Iowa State University. She married Paul Haight on October 17, 1943. To this union three children were born. Evelyn was a very active and loving homemaker. She was an assistant den mother for Cub Scouts, a member of the Eastern Star, the Clio Club, a member of the local Art Council and held office as president. Evelyn was also an active member of the Cresco United Methodist Women. In her spare time she enjoyed playing bridge, sewing, and playing golf with Paul, as well as on ladies day. She is survived by a daughter Carol (Jim) Amundson of Grovertown, Indiana, a son Ron of Houston, TX, a grandson Eric Amundson of Phoenix, Arizona, and two great-grandsons. She was preceded in death by her parents, her husband Paul on June 23, 2013, her twin sister Louise Kirkpatrick, and a child in infancy.

Visitation:
Friends may call one hour prior to services at the church.

Service:
Funeral services will be held on Monday, October 27, 2014 at 11:00 a.m. at the Cresco United Methodist Church in Cresco, Iowa.

Cemetery:
Burial will be in Oak Lawn Cemetery in Cresco. 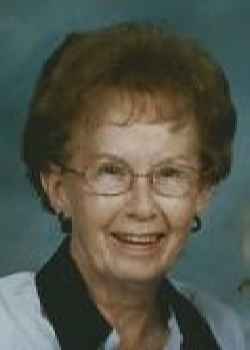