Eulalia Belle Blondie Neessen, 96, of Grundy Center, Iowa, formerly of Dike, Iowa, passed away on Sunday, July 1, 2018 at Creekside Nursing Home in Grundy Center. A memorial visitation will be held on Thursday, July 5, 2018 at the Engelkes-Abels Funeral Home from 12:00 p.m. until time of memorial service at 1:00 p.m. A private inurnment will be held at Elmwood Cemetery in Dike. Memorials may be directed to the family.

Blondie was born on May 5, 1922 in Mountain Lake, MN to her parents Frank and Selma (Regier) Schulte. The family relocated to Wellsburg, Iowa, where Blondie graduated from Wellsburg High School. She then went on to earn her diploma from Pitzies Beauty School. Blondie worked as a beautician at the school and later at a Waterloo beauty salon.

Blondie was united in marriage to Arthur Neessen on February 14, 1943. Art was drafted into the service of his country and was wounded in action in 1944. Blondie then spent the next 3 ½ years following Art around the country to receive medical care. All the while, Blondie worked as a beautician to support herself while Art recovered. In 1947 they bought a farm in Dike, Iowa where she supported and helped Art in his work. The couple then began their construction business, Neessen Construction. There, Blondie did the bookkeeping and even drove truck for many years. Blondie also began her own businesses in Dike. Her first was Blondies Cakes, where she made all sorts of cakes & cookies. She made cakes for local people and people as far away as Germany. Blondie then transitioned that business into a new one called Blondies Craft Consignments. She ran that business for many years until arthritis prevented her from continuing.

Art and Blondie welcomed three children into their family, Roger, Darrell and Hollie. Blondie lost Art on January 19, 1974 but later found comfort by reconnecting with an old high school friend Herman Okones. He was a dedicated companion and they spent 8 happy years together until his death on January 5, 1990.

Blondie loved music and was an accomplished musician. She played the organ, magic organ, accordion, saxophone, tuba and the steel guitar. She and Art also had their own, live, one-hour radio session every week in Waterloo in the early 1940s. She loved gardening and finding new things to plant and garden to surprise her family. She loved fishing, dancing and animals; especially dogs. 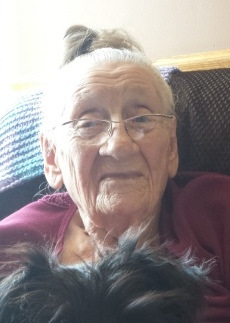