Vernon Eugene Moats, Iowa racing legend, 77, died January 15, 2017. He was born June 12, 1939 at his Grundy County, IA farm home, the youngest son of Edgar and Marie (Smith) Moats. He attended the Ivester Church of the Brethren where he was baptized in 1951. He was a student at rural Grundy County Schools, where he was a significant player on the football team. He graduated in 1957.

After completing high school, Vernon worked at Green Products in Conrad, John Deere at Waterloo, and Spokesman Press in Grundy Center. He then completed two years of alternative service at Iowa Methodist Hospital in Des Moines where he worked the night shift and part-time days for a towing company. He remained in Des Moines where he established his own towing and mechanic service.

Vern and Barb Simmons were married November 1972 and had a daughter, Jody. They later divorced.

Vern's passion and tenacity for drag racing cultivated in an incredible 48-year drag racing career. His achievements include: 16 national event wins, 15 NHRA division 5 championships, 14 JEGS Allstars Special event appearances, and 56 LODRS event wins in 3 different classes. Out of the many great years Vern had, 1985 was a standout as he finished #2 in the world points.

Vern was always striving for excellence and perfection from a very young age. He was known for a relentless work ethic and would always be ready to tantalize those around him!

Vern will be missed by his daughter and son-in-law, Jody and Kolby Kester, granddaughter, Keaton and grandson, Kale Kester; a sister, Marlene (Lyle) Neher, Grundy Center; a brother, Dean Moats, Knoxville; sisters-in-law, Phyllis Moats, Knoxville, and Joyce Moats, Conrad; and by numerous nieces and nephews. He was preceded in death by his parents, and a brother, Marvin. He will also be missed by many friends and acquaintances. 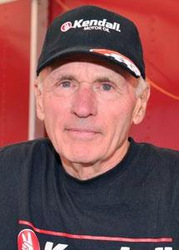