There will be a funeral service on Saturday, February 13, at 10:00 am, at the Calvary Christian Reformed Church in Orange City. The Revs. John Klompien and Aldon Kuiper will officiate. Interment will follow the service at the West Lawn Cemetery in Orange City. Visitation will be after 5:30 pm on Friday, with the family present from 5:30 pm to 8:00 pm, at the Church.

Arrangements are with the Oolman Funeral Home in Orange City.

Paul Edward was born on March 6, 1929, in Dike, Iowa, the son of Menne G. and Grace (Beninga) Bakker. He was raised in Dike and Wellsburg, Iowa, and attended the Beaver #7 grade school, the Dike and Wellsburg High Schools, Calvin College and Calvin Seminary in Grand Rapids, Michigan.

On June 21, 1951, he married Margery Ann Ross, in Wellsburg. They lived in Iowa, Michigan, South Dakota, and Minnesota, where he was a farm hand and served eight churches as a pastor.

In addition to his parents, he was preceded in death by a grandson, Shane De Jong; and his five siblings, Gerald Bakker; Herman Bakker; Elsie Graves; John Bakker; and Louis Bakker. 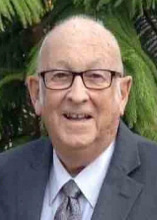