Gertrude E. Burch, 90, of Ackley, Iowa, formerly of Cedar Falls, died Thursday, October 19, 2017, at Grand Jivante Care Center in Ackley. She was born September 16, 1927 in Stout, Iowa, the daughter of Uffe and Jennie (Meyer) Lauterbach. Gertrude married John Burch on October 11, 1961 in Cordova, Alaska. He preceded her in death on March 2, 1999. Gertrude was a graduate of Evangelical Deaconess Hospital School of Nursing in Marshalltown, Iowa. She was a registered nurse at Sartori Memorial Hospital, Allen Memorial Hospital and as a missionary nurse for First Baptist Church, Cedar Falls, retiring in 1962.

She is survived by her son, Paul Burch, of Waterloo.

Gertrude was preceded in death by her parents and husband; one brother, Paul Lauterbach, and one sister, Ruth Rooney.

Services will be 2:00 p.m. Wednesday, October 25, 2017, at Stout Reformed Church, with burial at Stout Cemetery, both in Stout, Iowa. Visitation will be 46:00 p.m. Tuesday at Dahl-Van Hove-Schoof Funeral Home in Cedar Falls. Memorials may be directed to the Alzheimers Association. 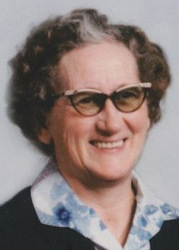