Lavina Jean Beenken was born November 3, 1934, in Holland, Iowa. She was the daughter of Luitjen and Mildred Sink Beenken. On May 2, 1953, Lavina was united in marriage to Virgil Martin at the Grundy Center Methodist Church. Lavina and Virgil owned and operated V and L Pastries in Parkersburg and Lake City for many years. Lavina later went to work for Square D in Cedar Rapids, then moving on to Collins Radio where she worked close to 20 years.

Lavina was a member of the United Methodist Church in Anamosa for 50 years, a member of the AMVETS Auxiliary, an IBEW member, and a proud Den Mother for Cub Scout Pack 67. She was a loving wife, mother, grandmother, great-grandmother and friend and will be missed dearly by those closest to her. 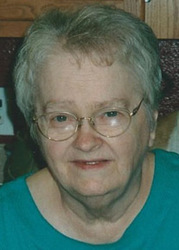