Samuel Imanuel Schmitt, 99, of Dike Iowa, passed away on May 7th, 2016. A public visitation will be held at the Ables Funeral Chapel in Dike, Iowa, on Wednesday, May 11th, 2016, from 5:00 until 8:00 pm. Funeral services will be held on Thursday, May 12th, 2016, in Stout, Iowa at the Reformed Church of Stout, at 1:30pm. Memorial contributions can be made to the family to be designated at a later date. Engelkes Abels Funeral Home is caring for Samuel and his family.

Samuel Imanuel Schmitt was born to Cornelia (Dieken) and Samuel E. Schmitt on July 29th, 1916, in rural Grundy County in the township of Fairfield, Iowa. He was raised and educated in the area, attending country school as well as High School in Dike, Iowa. On October 9th, 1941, Samuel was drafted into the United States Army, where he would serve as an Anti-Aircraft Artillery Technician. He was stationed at Camp Callan, California, Dutch Harbor, Alaska and finally Fort Bliss, El Paso Texas, until his honorable discharge on October 17th, 1945.
On March 29th, 1946, Samuel and Etta Meester were united in marriage in the parsonage at the Pleasant Valley Reformed Church, in Holland, Iowa. Together the family would make their home on a farm in Dike, Iowa. Samuel would farm for 33 years until his retirement in 1979. He was a member of the American Legion Post 471 in Dike, Iowa, as well as a lifelong member of the Reformed Church of Stout, in Stout, Iowa. There, he would serve as a Sunday school teacher, a Superintendent as well as serving on the consistory. He enjoyed gardening and woodworking. 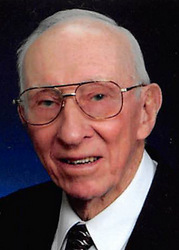