Leona Engelkes, 96, of Grand Rapids, Michigan, formerly of Grundy Center, passed away on Monday, May 16th at an assisted living facility in Grand Rapids, MI. A funeral service will be held on Saturday, May 21st at 11:00 AM at the Pleasant Valley Reformed Church in Holland (Fern) with Pastor Rick Vollema officiating. Visitation will be held on Friday, May 20th from 5 to 7 PM at the Engelkes-Abels Funeral Home. Burial will follow the funeral service at the church cemetery. Memorials can be made to the Pleasant Valley Reformed Church, Emerald Meadows Home (Grand Rapids, MI) or to Great Lakes Hospice (Grand Rapids, MI).

Leona was born on February 20, 1920 in Kesley, Iowa, the daughter of Jake & Tillie (Schurman) Sherman. She attended school in Parkersburg, graduating from Parkersburg High School in 1939. She then furthered her education at the Iowa Teacher's College (UNI), where she earned her Teacher's Certificate. She taught at local schools in the early 1940's. On May 23, 1940, Leona was united in marriage to Bernard M. Engelkes at the Little Brown Church in Nashua, IA. The couple welcomed two children into their family.

Her role as a teacher was a very important one, which prompted many ambitions in her career, one being that she began the first special education classes in the state of Iowa in 1952. She also drove school buses for 25 years, driving 200+ miles per day transporting special education children.

She was preceded in death by her parents; husband Bernie; daughter Faith; sister Rozella and brothers Richard and Raymond. 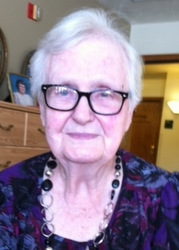