Vernon was born on August 9, 1940 in Grundy County, Iowa; the son of Rudolf and Violet (Muller) Heerkes. He was raised in Dike, Iowa and graduated from Dike High School. Shortly after high school Vernon enlisted in the United States Army, where he served as a drill sergeant at Fort Polk, Louisiana. Upon his honorable discharge from the Army, Vernon was united in marriage to Sandra Hofbauer on August 3, 1963 at the United Methodist Church in Ventura, Iowa. Vernon and Sandra made their home in Dike and welcomed four children into their family. Vernon worked for many years in sales and retired from Deli Express in 2010.

Vernon was a long-time member of the Dike United Methodist Church, where he served on numerous committees. In Vernon's free time he enjoyed working in his workshop. He also enjoyed woodworking and lawn care. What brought Vernon the most joy in his life was his family especially his grandchildren. They were his number one priority and they will forever love and miss him.

He was preceded in death by his parents; his wife of 50 years Sandra and his brother Kenneth in infancy. 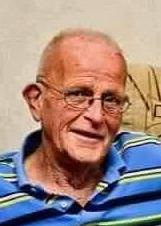