Rebecca Helen Murra, 65, of Wellsburg, passed away on Wednesday, January 27th at the Unity Point Health Allen Memorial Hospital in Waterloo after a long fight with many illnesses. A funeral service will be held on Saturday, January 30th at 11:00 AM at the Wellsburg Reformed Church in Wellsburg with Pastor Mark Anderson officiating. Visitation will be held on Friday, January 29th from 5 to 7 PM at the Doyen-Abels Funeral Home in Wellsburg. Burial will follow the funeral service at the Wellsburg Reformed Church Cemetery. Memorials may be directed to the family where they will donate to a charity of their choice at a later day.

Rebecca was born on November 22, 1950, in Hardin County, Iowa, the daughter of Douglas "Fritz" & Virginia (Aukes) Geerdes. Rebecca grew up in Wellsburg where she attended school, graduating with the Wellsburg High School class of 1969. On June 13, 1969, Rebecca was united in marriage to Duane Murra at the Wellsburg Reformed Church. After the couple was married, they moved to the farm. Rebecca drove the local school bus for many years, worked at Dodger Industries and later Ritchie Industries. Due to many health issues, Rebecca had to quit working.

She was a member of the Wellsburg Reformed Church where she was active in their bible study groups. Rebecca enjoyed reading, sewing, quilting, fishing and boating and was an avid sports fan, cheering on her favorite Iowa teams, the Hawkeyes, Cyclones and Panthers. She also enjoyed spending time with her family, especially her grandchildren. Although many health issues caused a life tougher for Rebecca then she deserved, she persevered and made the most out of every day, no matter how much pain she was in. She was affectionately known as "The Miracle" at the Mayo clinic in Rochester, because of how many times she beat the odds of her illnesses. Her family wants those who knew and loved her to know that she was the most loving and caring person there was and although they will miss her dearly, they are grateful Rebecca is now at peace.

She was preceded in death by her parents; infant daughter Amanda Dawn. 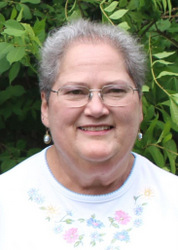