Marcella Irene High, 90, of Grundy Center, passed away on Friday, March 18, 2016 at the Grundy Care Center in Grundy Center. A Mass of Christian Burial will be held on Tuesday, March 22, 2016 at 10:30 AM at the St. Gabriel Catholic Church in rural Reinbeck with Father David Kucera officiating. Visitation will be held on Monday, March 21st from 5 to 7 PM at the Engelkes-Abels Funeral Home with a 7:00 PM vigil service. Burial will follow the luncheon on Tuesday at the Rosehill Cemetery in Grundy Center. Memorials may be made to the family.

Marcella was born on March 21, 1925, the youngest of two daughters, to Rudolph & Frances (Duschanek) Wanitschke, immigrants from Czechoslovakia. She began attending country school and later graduated from Grundy Center High School with the class of 1943. She then went on to attend Marycrest College. For a short time after college, Marcella worked at the Grundy National Bank in Grundy Center. She married Bob High on September 20, 1947 at the Sacred Heart Catholic Church in Grundy Center. Together, the couple welcomed four children into their family. She stayed home to raise her children and also worked part time at the family business, John High Hardware Store in Grundy Center. After Bob passed away, Marcella managed the business until selling it two years later, where she entered retirement.

She was a member of the St. Gabriel Catholic Church, the National Catholic Society of Foresters and the American Legion Auxiliary. Marcella enjoyed playing cards, cribbage, baking cookies and German Chocolate Cake, flowers, gardening yard work and she was a big Hawkeye fan. She also enjoyed summer trips with her family to Clear Lake but her true joy in life came from spending time with her family.

She was preceded in death by her parents; husband Bob; brother-in-law Russell Morrison and sister-in-law Carol High. 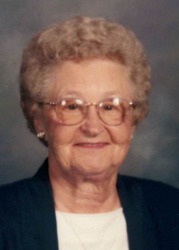