Gladys was born on January 31, 1916 at the family farm in Grundy County, Iowa. She was the daughter of Joe and Kathryn (Haren) Meester. She attended Pleasant Valley Country School in Grundy County, Iowa. Gladys was united in marriage to John B. Van Deest on December 26, 1935 at the Colfax Center Presbyterian Church in rural Holland. Together they welcomed four children into their family. John passed away on March 31, 1982 after 46 years of marriage. Later in life Gladys met her special friend Charlie Reber and they enjoyed 24 wonderful years together until Charlie passed away on November 7, 2010.

Gladys was a long-time member of Bethany Presbyterian Church. Alongside her husband John, she owned and operated the Farmers Coop Gas Station in Holland. Gladys was known around Grundy County as the Avon Lady in the VW Bug. She enjoyed gardening both flowers and vegetables and loved the outdoors. Gladys also loved watching and feeding birds at her home.

She was preceded in death by her parents; her husband John; her friend Charlie; her 2 brothers and 1 sister. 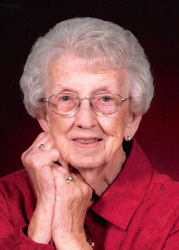