Julie Ann Hackett, 69, of Conrad, IA passed away Monday, August 12, 2013 at Allen Memorial Hospital, in Waterloo, IA. As per her wishes there will be no services and cremation rites will be accorded. The Conrad Chapel of the Anderson Funeral Homes, in Conrad, IA is assisting the family with arrangements.

Julie was born April 25, 1944 in Savanna, IL to LaVerne and Mary Jane Thulen. She was raised by her grandmother, Elizabeth Green. She was united in marriage to Jerry D. Hackett on April 28, 1963 in Chadwick, IL. Julie enjoyed collecting glassware and antiques and also enjoyed gardening. She loved spending time with her grandchildren.

She was preceded in death by her grandmother, Elizabeth Green; her parents; her sister, Barb Skimhorne and her daughter, Terri Lynn Hackett. 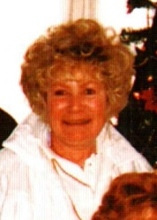