Irma was born in rural Liscomb, Iowa on January 31, 1917 to her parents Lemert and Pearl Gould. She graduated from Albion High School in the Class of 1934. Irma was united in marriage to Melvin Shipley on October 12, 1935, together they farmed in the Clemons and Reinbeck area until 1980, when they retired and moved to Reinbeck. Irma was a member of the United Methodist Church and Women's Society. She enjoyed needlework and crafts and was an avid card player.

She was preceded in death by her parents; husband Melvin, who died in 2005; brothers Earl and Percy Gould and her sister Velda Walter. 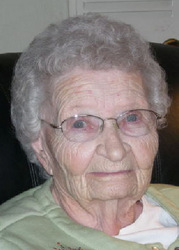