Mary Katherine Dew was born August 11, 1918 in Knox County, Indiana. She was the daughter of William S. and Pearl Bennett Bowen. Katherine graduated from the Freelandville High School with the class of 1937.

Katherine and her mother moved from Indiana to Waterloo, Iowa. There Katherine was employed at the Varsity Cleaners. On January 23, 1952 she was united in marriage to George I. Dew at the home of her brother Everett in Morrison, Iowa. She and George farmed in Tama County near Lincoln. Upon their retirement they sold the farm and moved to Reinbeck. Katherine was a long time member of the First Presbyterian Church in Reinbeck. George preceded her in death in September of 1987. Katherine entered Parkview Manor in Reinbeck in March of 2006.

She is preceded in death by her parents; husband; brothers, Elmer (in infancy), Everett, Russell and a sister Bernice Graveman and nephew Gene Graveman. 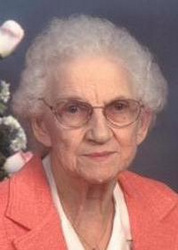