Warren Anderson, 91, of Holland, Iowa, died Saturday, March 21, 2015, at his home while under the care of Unity Point Hospice. Funeral services will be at 10:30 A.M., Wednesday, March 25, 2015, at the Colfax Center Presbyterian Church in rural Holland. Visitation will be held Tuesday, March 24, 2015, from 5 P.M. to 7 P.M. at Engelkes-Abels Funeral Home in Grundy Center, Iowa. Burial will follow funeral services at the Holland Cemetery. Memorials may be directed to the family.

Warren Andrew Anderson was born on December 14, 1923 to Andrew & Annie (Eygabroad) Anderson at Lincoln Township, Grundy County, Iowa. The family moved to Wellsburg, where he graduated from High School in 1942. He attended Calvin College in Grand Rapids, MI. He served in the U.S. Army in 1946 for the Army Security Agency in Washington D.C.

Warren was united in marriage to Leona Mathilda Brower on August 15, 1945 at the 2nd Christian Reformed Church in Wellsburg. To this union three daughters and one son were born. Leona passed away January 29, 2004. He later married Kathleen Poling Gethmann on Sept. 17, 2005 at Colfax Center Presbyterian Church.

He was a faithful member of 2nd Christian Reformed Church of Wellsburg and later of Colfax Center Presbyterian Church, rural Holland. He was active in the church, serving as elder, deacon, choir member and taught various Sunday school classes for 64 years.

Warren was a crop and dairy farmer, and later became a District Manager of Crow's Hybrid Seed Corn Company. While farming, he had a very successful Holstein dairy herd which he and Leona tended to faithfully. Warren was recognized for his leadership in Grundy County Soil Conservation & Preservation.

Warren was an active member of the Gideon's International for 30 years. After his retirement, he became an instructor for Crossroads Bible Institute, helping incarcerated persons grow in life transforming relationships with Jesus Christ, mentoring them in correspondence Bible Studies.

Woodworking, fishing and camping were his favorite hobbies. Most of all he loved his family and enjoyed watching the grandchildren in all their school activities. In the later years, Warren and Kathy enjoyed going to community events, fishing and spending time with family. His smile warmed many hearts. Often you could find him visiting with people wherever he went. His love for Jesus Christ was his reason for loving people.

The family wishes to thank the staff of Unity Point Hospice for their kind, compassionate care. 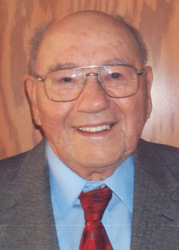