Mary Anna Benson, 90, of Reinbeck, passed away on Thursday, May 22, 2014, at her son's home, rural Reinbeck Iowa. A Mass of Christian Burial will be held at 10:30 am, on Wednesday, May 28, 2014 at St. Gabriel Catholic Church rural Reinbeck, Iowa. Burial will follow at the Elmwood Cemetery in Dike, Iowa. A visitation will be on Tuesday, May 27, 2014 from 4pm to 7pm at St. Gabriel Catholic Church with a rosary beginning at 6:30 pm. Memorials may be directed to the family.

Mary Anna was born in rural Cedar Falls on October 4, 1923, the daughter of Alfons and Josephine (Schumacher) Hum. She graduated from Finchford High School. On April 25, 1946 Mary was united in marriage to Willys Benson at St. Patrick's Catholic Church in Cedar Falls, Iowa. Together they farmed in the Dike/Reinbeck area until retirement. She enjoyed gardening, being outdoors, the Easter holiday, her cats and her coffee time after church. But most of all she enjoyed spending time with her family.

Mary was a member of Saint Gabriel Catholic Church and a life time member of Holy Family Circle.

Preceding her in death were her husband, her parents; daughter Joan Held, 2 aunts Anna Kerns, Martha Judisch and one uncle, George Schumacher. 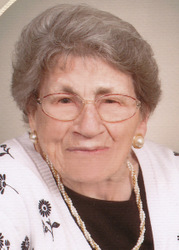