Idabelle Rose McIntyre, 84, of Reinbeck, Iowa went home to her Lord on Friday, December 12, 2014, at the Grundy Care Center in Grundy Center while under the care of Care Initiative Hospice. Funeral services will be held on Saturday, December 20, 2014, at 10:30 a.m. at The United Methodist Church in Reinbeck. Visitation will be on Friday, December 19, 2014 from 5 pm until 8 pm. at French-Hand Funeral Home in Reinbeck. Burial will follow at Washington Township Cemetery rural Morrison. Memorials may be directed to the family

On December 13, 1929, she was welcomed by her parents William Lester and Gladys (Wittgreve) Ragsdale at Allen Hospital in Waterloo, Iowa. She lived in Missouri and Iowa most of her life. She graduated from Reinbeck High School in 1947.

On September 25, 1948 she was united in marriage to LeVern (Nut) McIntyre. To this union 3 girls and 1 boy were born. They made their home in Morrison, IA. Idabelle took care of her family. Later she worked at Plastronics in Grundy Center, IA retiring from there.

She loved her family, reading, playing cards, camping, jigsaw puzzle, crossword puzzles and crocheting. She lost her husband in April of 2001, moved from her acreage in Morrison to a condo in Reinbeck. Idabelle was a member of The United Methodist Church and American Legion Auxiliary both in Reinbeck.

She was preceded in death by her parents, husband LeVern, daughter Mary Rachel Erhardt, and grandson Joe David Johnson. 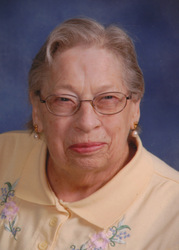