Carol Severance, 95, of Cedar Falls, Iowa, died Thursday, June 26, 2014, at the Western Home Communities Windridge. She was born January 13, 1919 in Reinbeck, Iowa, the daughter of George and Emma (Garland) Saul. Carol married H. Judson Severance on April 17, 1940. He preceded her in death in 1993. Carol graduated from Reinbeck High School and attended Iowa State University in Ames, Iowa. She was a teacher in a country school, owned and operated Carols Apparel in Grundy Center, Iowa, was Assistant Manager of Blacks Casual Shop in Cedar Falls, and retired as a clerk in the Grundy County Treasurers Office. Carol was a member of PEO Ch. AR in Grundy Center, Walnut Ridge Baptist Church in Waterloo, and the Experimental Aircraft Association (EAA).

Carol was preceded in death by her parents, husband, a brother, Frank Saul, and a sister, Wava Barnes.

Services will be 10:30 a.m. Saturday, June 28, 2014, at Dahl-Van Hove-Schoof Funeral Home in Cedar Falls, with burial at 1:30 p.m. Saturday at Rose Hill Cemetery in Grundy Center. Visitation will be 47:00 p.m. Friday, and one hour before service, at the funeral home. Memorials may be directed to the family. 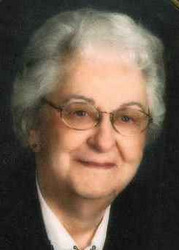