On Lola Marie was born in Burchinal, Iowa, on March 30, 1934, the daughter of Loyd and Eula (Hartman) Bartlett. She grew up in the Mason City area attending school and graduating from Mason City High School. After graduation she attended and graduated from Mason City Junior College in Mason City, Iowa.

Lola married Roger Whitcome on August 1, 1954, at the Methodist Church in McIntire, Iowa. Lola taught school for a few years before becoming a full time mother and housewife.

Lola was a longtime member of the United Methodist Church in Grundy Center, where she served on numerous committees. She was a 50 year member of the Eastern Star and lifelong member of the Garden Club. She enjoyed gardening, crossword puzzles, reading, restoring antique furniture, collecting and making doll houses. She was a follower of her grandchildren's activities, Waverly- Shell Rock sports especially wrestling, baseball and football and her granddaughter's piano and dance recitals. Most of all Lola enjoyed spending time with family and friends especially her grandchildren. 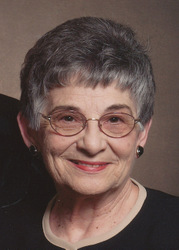