Iner Larsen, 87, of Reinbeck, Iowa, passed away on Saturday, November 29, 2014, at The Elms, while under the care of Cedar Valley Hospice. A funeral service will be held at 10:30 A.M. on Thursday, December 4, 2014 at the Union Congregational United Church of Christ in Reinbeck. Burial will follow at Reinbeck Cemetery. Visitation will be held from 4:00 P.M. until 7:00 P.M. on Wednesday, December 3, 2014 at the French-Hand Funeral Home in Reinbeck; with a 7:00 P.M. Masonic service, conducted by the Masonic Coin Lodge # 394. Memorials may be directed to the family.

Iner was born on December 30, 1926 in Black Hawk County, Iowa; the son of Sofus and Ingeborg (Larson) Larsen. He was raised in Reinbeck and graduated from Reinbeck High School in the Class of 1944. After graduation he joined the US Navy serving his country from December 29, 1944 to July 13, 1946. He was united in marriage to Vivian Bern on October 11, 1947 in Waterloo, Iowa. They had 4 children and made Reinbeck their home.

Iner worked as a farmhand and then at John Deere for 5 years, before owning and operating the Hardware store in Reinbeck for 58 years.

Iner was a lifelong member of the Union Congregational United Church of Christ in Reinbeck, served as a member of the Reinbeck City Council, was an active member in the Reinbeck Masonic Coin Lodge #394, Reinbeck Fire Department, Izaak Walton, American Legion Action Post #242 and Oak Leaf Country Club.
He enjoyed playing cards, golfing, fishing, and watching his grandchildren play sports. His true joy in life came from spending time with his family and friends. 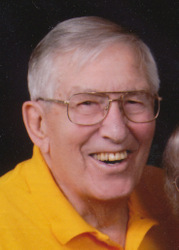