Vivian was born on September 7, 1929 in Reinbeck, Iowa, the daughter of Carl & Mae (Redfearn) Bern. She graduated from the Reinbeck High School in the class of 1947. She was united in marriage to Iner Larsen on October 11, 1947 in Waterloo, Iowa. They made their home in Reinbeck and welcomed four children into their family.

She and her husband owned and operated the hardware store in Reinbeck for 58 years.
Vivian was a lifelong member of the Union Congregational United Church of Christ in Reinbeck and a member of the Reinbeck American Legion Auxiliary.

Vivian enjoyed playing Bridge, sewing, cooking and baking. She was an avid sports fan and especially enjoyed supporting her grandchildren in their athletic activities. Her true joy in life came from spending time with her family and friends. 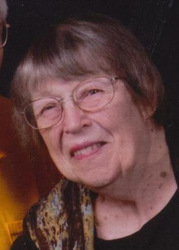