He was born October 27, 1926, in Wellsburg, Iowa to John G. and Anna (Ross) Bakker. Meint served in the army during World War II as a paratrooper and was stationed in Japan. He married Gerry Hornung in 1950. Meint owned Bakker Oil for 37 years. Meint served on many boards including the Bank Board at People's Savings Bank in Wellsburg for 20 years, the Timothy Christian School Board for eight years, and the consistory at First Christian Reformed Church for twelve years. He married Bonita (Petersen) Bakker on February 25, 1989, in Cedar Falls, Iowa.

He was preceded in death by his parents; his first wife of 37 years, Gerry Bakker; his sister, Alice Kramer; and brothers, Evert, Garret, Gratus, and Mennie.

A visitation will be held at First Christian Reformed Church in Wellsburg, Iowa, Monday, February 10, 2014 at 10 a.m. with a funeral service following at 11 a.m. with Pastor Tom Vos officiating.

Donations or gifts may be sent to First Christian Reformed Church of Wellsburg or St. Luke's Lutheran Church in Middleton, WI. 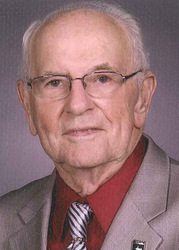