Mildred was born on June 26, 1915, in Fairbury, Nebraska, the daughter of Roy I. and Ella "Heiner" Hale. She and her family lived in Fairbury, Nebraska until 1929 when the family moved to Conrad, Iowa. Mildred graduated from the Conrad High School in 1933. She went on to attended Iowa State Teachers College in Cedar Falls, Iowa, graduating in 1935. She taught school in Grundy and Tama counties from 1935-1939. On April 30, 1939 she was united in marriage to Edgar Abels in Cedar Falls, Iowa. She worked for John Deere and the Rock Island Arsenal from 1939-1945. She started working for J.C. Penny's in 1967 and worked there until 1974 when she retired. Mildred was a member of the Dike United Methodist Church and the Mary Circle at church.

She was preceded in death by her parents; 2 sisters: Bethel McCallister and Twilla Ginger. 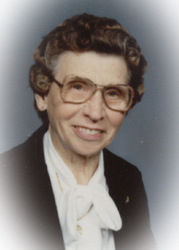