Louise Ella Eckhoff, age 93, of Steamboat Rock, Iowa, entered eternal rest on Sunday July 21, 2013 at the Presbyterian Village in Ackley, Iowa while under Care Initiatives Hospice. A funeral service will be held at 10:30 A.M. on Wednesday, July 24, 2013 at the First Christian Reformed Church in rural Wellsburg. Burial will follow at the church cemetery. A visitation will be held from 5:00 P.M. until 7:00 P.M. on Tuesday, July 23, 2013 at the Doyen-Abels Funeral Home in Wellsburg. Memorials may be directed to the family.

Louise was born on February 14, 1920 in rural Stout, Iowa, to Ludwig Beenken and Verna Vink Beenken. She graduated from Grundy Center High School and first worked in Grundy for a few years.

Louise was married to Henry L. Eckhoff on August 14, 1941 in Princeton, Missouri. They spent their entire married life farming near Steamboat Rock, Iowa, where they were blessed with four children. There they remained until they both took residence at The Presbyterian Village of Ackley in 2005.

Louise was an active member of the First Christian Reformed Church of Wellsburg. She was a member of the Queen Esther Society, the Ladies Guild, and taught Sunday school. She was employed in Eldora, Iowa for 10 years while being a wonderful farm homemaker. She kept busy with cooking, sewing, gardening, and the numerous farm chores. 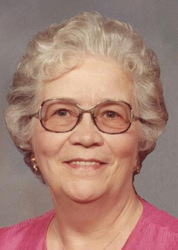