Hazel Eiklenborg, age 92, of Stout, Iowa, was born on October 9, 1920, the daughter of Hilko and Stina (Berends) Oldenburger, on the family farm north of Parkersburg. She attended rural school near their home.

On December 13, 1946, Hazel Oldenburger was united in marriage with Frank Fred Eiklenborg in the parsonage of the Christian Reformed Church in Parkersburg, Iowa. Following their marriage, they made their home on a farm near Stout, Iowa and moved into Stout in 1976. Hazel enjoyed living on the farm and helping Frank with farming and chores. She also worked at U.N.I. for 17 years in housekeeping.

She faithfully attended the Christian Reformed Church. She enjoyed sewing, embroidery work, crocheting, and making quilts, especially for her grandchildren and great-grandchildren.

Hazel died Saturday, December 8, 2012, at the Cedar Valley Hospice Home in Waterloo of pancreatic cancer. She was preceded in death by her husband, Frank, on March 9, 1999; her parents; a brother, Bob Oldenburger; and a sister-in-law, Betty Oldenburger.

Funeral Services will be 1:30 p.m. Wednesday, December 12, 2012, at the Christian Reformed Church in Parkersburg, with burial in the Stout Cemetery in Stout, Iowa.

Memorials may be directed to the family, Christian Reformed Church or Cedar Valley Hospice. 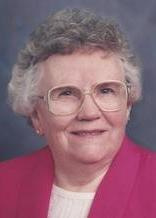