Fern E. Cole, 72, of Eldora, died from natural causes on Sunday, February 11, 2007 at the Davis Center in Bloomfield, Iowa. Funeral services will be at 10:30 am on Friday, February 16, 2007 at the First Assembly of God in Eldora with Pastor Fred Rosenkrans officiating. Burial will follow at Benson Cemetery near Whitten. Visitation is from 5 pm to 7 pm on Thursday at Creps-Abels Funeral Home in Eldora.

Fern was born June 26, 1934 in Whitten, Iowa, daughter of Oren and Verda (Godfrey) Chrisman. She was educated in the Gifford School System and on August 30, 1954 Fern was united in marriage to Ralph Alvin Cole in Hampton. She was mentally disabled and lived at the Hardin County Home for over thirty five years until their closing. Fern then lived at the CIRSI House in Iowa Falls for five years, the Eldora Nursing and Rehab Center in Eldora for a year, Manor Care in Waterloo for a year, and then at Davis Center in Bloomfield for a year until her death.

She was preceded in death by her parents; her husband, Ralph in August of 1966; brother, Earl Chrisman; and sister, Margie Betts. 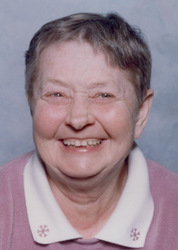