Raymond D. Willer, 91, of Reinbeck, Iowa, died Thursday, March 9, 2006, at Parkview Manor in Reinbeck. Visitation and a time of remembrance will be from 1:00 P.M. to 3:00 P.M., Saturday, March 25, 2006, at French Hand Funeral Home in Reinbeck, where the family will be present to receive friends. Following cremation, a private family inurnment will be held at the Reinbeck Cemetery, the following week. A memorial fund has been established.

Raymond was born October 25, 1914, in rural Reinbeck, Iowa, the son of Henry and Anna (Steffen) Willer. He and his family moved into town in 1922 where his father worked as the sexton of the Reinbeck Cemetery. Raymond graduated from Reinbeck High School in 1932 and was employed by several local firms during the Depression years. In 1940, Raymond was united in marriage to Marie Lapp of Macon, Missouri. He began working for John Deere-Waterloo Tractor Works in 1942 and retired from John Deere in 1976. During these years he also enjoyed working on-call during the summer months for house painting contractors in Reinbeck. Raymond also found time for helping Reinbeck senior citizens with their handy-man type jobs during his working life. In August 1999, he went to stay at Parkview Manor in Reinbeck, where he resided until the time of his death. Raymond enjoyed Iowa Hawkeye's football and basketball, fishing, hunting, and trips to the Pacific Northwest. Card playing was a regular, scheduled activity.

He is survived by one son Ray Dean Willer and his wife Gloria of Portland, Oregon; one grandson Philip of Portland Oregon; two great grandsons; and several nieces, nephews, and cousins. 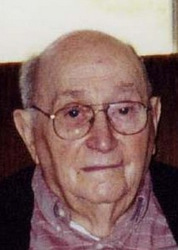