Mr. Heyenga graduated from Parkersburg High School in 1942, then continued his education at Iowa State Teachers College, Cedar Falls. While in college, he served in the U.S. Army in the Philippines during World War II in the Signal Corps as a radio interceptor and teletype operator. He then returned to college. He worked at the Retail Credit Co. as an insurance adjuster in Waterloo and at Rath Packing Co. for a few months during 1949. In 1967 he and his wife moved to Stout and purchased the Stout Grocery Store, which they operated until 1979. During this time he also worked part time as an editor for the League of Christian Laymen Magazine and was a school bus driver for the Dike Community School for more than 20 years. He was a member of Reformed Church of Stout, where he had served as an elder several times, taught adult Sunday school, sang in a mens quartet and was the church custodian with his wife for several years.

Preceded in death by: a brother, Walter John.

Services: 1:30 p.m. Saturday at Reformed Church of Stout, with burial in Stout Cemetery. Public visitation from 6 to 8 p.m. today at Redman-Schwartz Funeral Home, Parkersburg, and for an hour before services Saturday at the church.

Memorials: may be directed to the family. 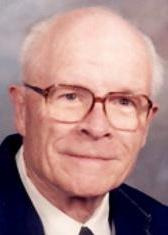