Alberta was born on October 17, 1920 in Garwin, Iowa, to her proud parents Hans and Dorothy (Boldt) Jensen. She grew up in the Garwin, Traer and Gladbrook area. Alberta graduated from Gladbrook High School with the Class of 1939.

Alberta and Leroy Block were united in marriage on May 25, 1946 in Grundy Center, IA. They made their home on a farm south of Reinbeck and welcomed three children to their family. Alberta helped Leroy on the farm as well as raising their three sons. They retired in 1983 and moved to Reinbeck. In April of 2009 they moved to Grundy Center.

Alberta was member of the American Legion Auxiliary, a member of the Royal Neighbors and a devoted member of the Union Congregational United Church of Christ. Alberta's family remembers her as a strong, loving and wonderful mother. She will be missed and long remembered by her friends and family.

She is preceded in death by her parents and two brothers-in-law and their spouses, Leo (Elizabeth) Block and Harold (Clara) Dielman. 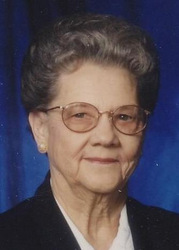