Bud was born on his family farm in Washington Township in Grundy Center on January 14, 1924 to his parents Charles and Emma (Cummings) Mooty; and lived there his whole life. Bud attended Country School Washington # 7 and Grundy High School.

Bud was united in marriage to his wife Helene Dolores Kline on October 19, 1946 at the Alice Church of God in rural Conrad, Iowa. Together they welcomed three children into their family. He was a lifelong member of the First Presbyterian Church in Grundy Center.

Bud was well known for his love of ponies and Belgian horses. He enjoyed driving his teams in parades and giving rides to family and friends. He was the Iowa Horse Plowing Champion at Living History Farms in 1980 and 1981.

He is preceded in death by his parents; sisters Alice Lovell, Lois Mooty and Marlys Mooty in infancy. 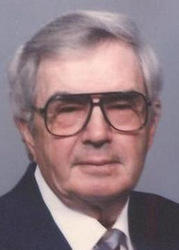