Verne Paustian, of Reinbeck, Iowa, died Thursday, July 15, 2010, at Allen Hospital in Waterloo, Iowa. Funeral services will be 10:30 A.M., Monday, July 19, 2010, at French-Hand Funeral Home in Reinbeck, Iowa. Burial will be at the Cedar Memorial Park Cemetery, Cedar Rapids, Iowa. Visitation will be one hour prior to service. Memorials may be made to The United Church of Christ in Reinbeck.

Verne Robert Paustian was born in Tama County, Iowa, September 19, 1917. He was the son of Charles and Celesta (Valenta) Paustian. Verne started school in Traer, Iowa. While attending first grade his family moved to Cedar Rapids where he graduated from Washington High School. He worked for six years for Hamilton Seed and Coal Company in Cedar Rapids before enlisting in the Army Air Corps in 1943. He was discharged from the Army Air Corps in 1946 with the rank of Sergeant. After his discharge from the service he enrolled at Iowa State College, now Iowa State University. He majored in Agronomy and graduated with a Bachelor of Science Degree in 1949. He was hired as a Agronomist for the Reinbeck plant of Pioneer Hi-Bred Corn Company and started to work in Reinbeck in July of 1949. While working for Pioneer he spent the winter of 1971 in Argentina supervising the production seed corn which was shipped to Iowa to sell to customers in the United States. He replaced Wayne Brown as plant manager in April 1972. Verne retired as plant manager in January 1981 and continued to live in Reinbeck. He was extensively involved in community activities. He was Scoutmaster of the Reinbeck Scout Troop when he first came to Reinbeck. He was on the Agricultural Advisory Board of the Hawkeye Institute of Technology for six years. He worked with the gifted students in Reinbeck Elementary School for three years. He was a member of the Reinbeck Preschool Board for several years. He also served on several boards and committees of the United Church of Christ in Reinbeck. He was a member of the Community Development Corporation and served as secretary of the group. For a number of years he wrote a column, "That's Interesting", for the Reinbeck Courier. The column highlighted Reinbeck businesses and individuals with interesting hobbies or avocations. He was always ready to be part of activities that promoted Reinbeck or made it a better place to live. 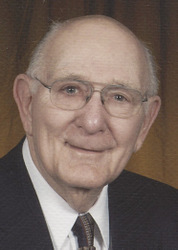