Trena Dreesman, 86, of Dike, passed away on Wednesday, July 7, 2010 at the Grundy County Memorial Hospital Long Term Care Unit in Grundy Center while under the care of the Cedar Valley Hospice. Funeral Service will be held at 10:30 a.m. on Saturday, July 10, 2010 at Lincoln Center Christian Reformed Church in Grundy Center, IA. Burial will immediately follow at Rosehill Cemetery, Grundy Center. Visitation will be held on Friday, July 9, 2010 from 4:00 p.m. to 8:00 p.m. at Engelkes-Abels Funeral Home in Grundy Center.

Trena was born on December 20, 1923 in rural Butler County, Iowa to her parents Dick and Alice Oltman. There she lived until she was united in marriage to her husband Sam on November 20, 1942 at Lincoln Center Christian Reformed Church. They then moved to Grundy County and welcomed their two sons Dennis and LeRoy to their family. Trena and Sam moved off the family farm and relocated to Dike in 1976. There they lived together until Sams death in 1998. Trena then continued to make Dike her home up until one week ago when she entered hospice care in Grundy Center.

Trena was a homemaker for most of her life, however, in her later life she worked as a waitress at The Barn Café in Dike and both she and her husband worked as custodians at the University of Northern Iowa for a couple of years.

She was an active member in the Lincoln Center Christian Reformed Church and was very involved in various ladies groups. Trena enjoyed the outdoors, tending her garden and spending time with her family, especially her grandchildren. She will be missed and long remembered by her friends and family.

She is preceded in death by her parents, her husband, Sam, her brothers Dicky Oltman, Jr., Ben Oltman, Rienert Oltman and Ernest Oltman. 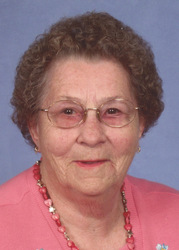