Robert Ray Dufel, 73, of Hudson, Iowa, died Sunday, May 23, 2010, from natural causes at Grundy County Memorial Hospital in Grundy Center, Iowa. Funeral services will be 10:30 A.M., Thursday, May 27, 2010, at Zion Lutheran Church, rural Hudson, Iowa, with Pastor Claudia Tessmer officiating. Burial will follow at the Reinbeck Cemetery. Visitation will be 4:00 pm to 7:00 pm Wednesday, May 26, 2010, at French Hand Funeral Home in Reinbeck. Memorials may be directed to the family.

Robert Ray Dufel was born March 7, 1937 on the family farm in rural Hudson, Iowa, the son of Raymond and Florence (Horstman) Dufel. Robert was united in marriage to Shirley Mae Koch in Hudson, Iowa on March 10, 1957. Robert's early education was in the rural one room school house beside the family home, which later was remodeled and became their home. His later education was at Reinbeck High School graduating with the class of 1955. After graduating he began his farming career. Robert farmed along side of his father, Raymond until his father's retirement. He continued the family farming operation until his retirement in 1999. He had many hobbies which included boating, motorcycles and his love of restoring antique John Deere tractors and collecting John Deere memorabilia. He loved meeting others with the same love of John Deere tractors. Robert was faithful member of Zion Lutheran Church his entire life, where he served on various committees. 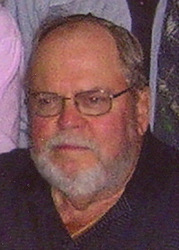