Esther was born on August 26, 1917 in Toledo, Iowa the daughter of Peter & Alma (Stransky) Rayman. She grew up in Tama County attending school in Toledo, graduating from Toledo High School. She met Frank Mamminga and the two were united in marriage on June 14, 1936 at Esthers parents home. The couple moved to Grundy Center, where they welcomed two children. Esther received her teaching certificate and taught school for one year in Lincoln, Iowa. She stayed home to take care of her children and when her children were grown, she and her husband Frank ran the Grundy Food Mart on G Ave. in town for 42 years.

Esther enjoyed scrapbooking, writing letters to friends and family and was known for being a wonderful cook. She was a member of the First Presbyterian Church in Grundy Center.

She was preceded in death by her husband Frank; brother Lester Rayman. 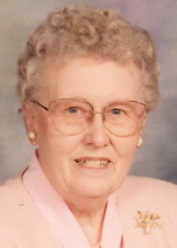