Joseph John Karkosh, Sr., of rural Hudson, Iowa passed away on Friday, March 12, 2010 at the age of 89. Joe had been living at Parkview Manor Nursing Home in Reinbeck since September 2008.

Joe was born May 22, 1920 in rural Black Hawk County, Iowa, the youngest of six sons to Louis and Anna (Kremenak) Karkosh. He grew up on the family farm near Voorhies, attended country school and then graduated from Reinbeck High School in 1937. He married Thelma Kahler on January 12, 1944 at the United Congregational Church of Christ in Waterloo. Together for 63 years, they lived on their farm south of Hudson until August 2007 when they moved to Westview Estates in Reinbeck.

Joe was a member of the United Church of Christ in Reinbeck. He was an active member of the Hudson Lion's Club for 50+ years and served as a school board member for the Hudson Community School District.

Joe was a farmer and a father. For many years, he raised livestock including a 5000 bird-laying house. He also raised corn and soybeans. Joe loved to fish and especially enjoyed his many trips to Canada and Nisswa, Minnesota with family and friends. He and Thelma took many summer vacations; most memorable one was to Alaska. Joe loved to garden and took pride in his vegetables and loved to share them with family and friends. He and Thelma spent many hours each year canning and freezing them for the coming year. A favorite past time for Joe and Thelma was to take a day trip which always included a picnic along the way, most times with family or friends. For several years, Joe and Thelma had an extensive holiday lighting display on their acreage and he enjoyed watching all the cars that stopped by to view them. Joe was known for his love of trains and had several models on display in their home. He loved to play cards, especially Blitz and Pepper. A card game was usually played during a family get-together or visit with friends. Joe was very proud of his grandkids and enjoyed attending their many concerts and ball games throughout their school years. He loved being together with his family for holidays and birthdays were always special occasions.

His parents, his five older brothers and his loving wife Thelma preceded Joe in death. 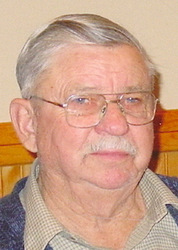