Margaret Smith, 91, of Grundy Center, formerly of Dike, IA, passed away on Thursday, March 4, 2010 at the Grundy County Memorial Hospital Long Term Care Unit in Grundy Center while under the care of the Cedar Valley Hospice. Funeral Service will be held at 10:30 A.M. Wednesday, March 10th, at Dike United Methodist Church in Dike, IA with Pastor Dan Ridnouer officiating. Burial will follow at Elmwood Cemetery in Dike. Visitation will be held Tuesday, March 9th from 4:00 P.M. to 8:00 P.M. at Engelkes-Abels Funeral Home in Grundy Center. A memorial fund has been established.

Margaret was born on December 3, 1918 to her parents Benjamin and Mabel Bradford. She grew up in Belle Plain, Iowa and graduated from Belle Plain High School. She was united in marriage to her husband Wallace Smith on July 28, 1940 in Belle Plain, Iowa. They made their home in Dike in 1942 and proceeded to raise their family there. She was a homemaker and a nurse aid for the Grundy County Memorial Hospital for 20 years. Upon Wallaces death in 1993, Margaret moved to Grundy Center, Iowa.

She was a 50 year member of Dike United Methodist Church and a long time member of the Rebekah Lodge in Dike. Margaret enjoyed playing bridge in her local bridge club as well as gardening. She will be missed and long remembered by her friends and family.

She is preceded in death by her parents; brother Charles Bradford; husband, Wallace; grandson Andrew Kopplin and son-in-law Ronald Rust. 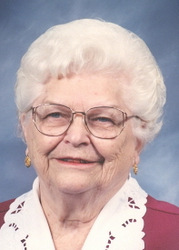