Arline M. Eckhoff, 89, of Grundy Center, Iowa went to the Lord, Monday, November 30, 2009 at Grundy County Memorial Hospital Long Term Care, in Grundy Center, Iowa. Funeral Services will be Thursday, December 3, 2009 at 1:30 pm at the First Baptist Church in Grundy Center with Pastor Michael Nemmers officiating. Visitation will be one hour prior to service at the church. Burial will follow at Eldora City Cemetery in Eldora, Iowa. Memorials for Arline may be directed to First Baptist Bible College and Theological Seminary.

Arline was born August 6, 1920 in Melrose Township # 8, Grundy County, IA, the daughter of D.L. and Florence (Musgrave) Barton. She attended country school and graduated from Whitten High School in 1938. She attended Alice Church of God during this time she accepted the Lord as her personal Savior. She enjoyed being a 4-H member, going to Bible school and the weekly visits to her Musgrave grandparent's home in Eldora. She especially enjoyed the vacation trips to Barton grandparent's home in Pennsylvania where she first glimpsed mountains. Arline worked in Chicago as a bookkeeper and attended Moody Bible Institute Night School where she made many nice friends and visited many sites in the area. In 1945 Arline was united in marriage to Henry Eckhoff at her parent's home in Eldora. Henry had been recently discharged from military service after serving four years overseas during WWII. They sent their married life in Grundy Center and were members of the First Baptist Church where they served the Lord teaching Sunday school, DVBS, Women's Mission Union and various other ways. Arline was known for her love of flowers and generously shared with others getting their flower beds started. She loved to travel. She and Henry were privileged to visit all of the 48 mainland states. Arline was interested in historic preservation and was instrumental in securing the horse stall from her grandfather Musgrave's barn (built in 1899) for the Morrison Heritage Museum.

She is survived by two sons, Greig and his wife of Arizona and Craig of Texas; 2 grandchildren and 1 great granddaughter; 1 sister Zola of Des Moines, IA, a brother, Dean Barton and wife of Pennsylvania and a sister-in-law Doris (Roll) Barton of Waterloo.

She was preceded in death by her husband Henry, her parents and one brother Darrell Barton. 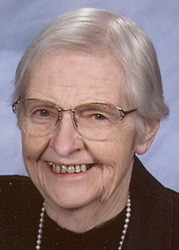