Donald Stahl, 79, of Grundy Center, passed away on Saturday, November 14, 2009 at the Mayo Clinic Methodist Hospital in Rochester, MN. Funeral services will be held on Friday, November 20, 2009 1:30 P.M. at the Colfax Presbyterian Church with Pastors Larry Hoop and Larry Doughan officiating. A visitation will be held on Thursday, November 19, 2009 from 4 to 8 P.M. at Engelkes-Abels Funeral Home in Grundy Center. Interment will be at Rose Hill Cemetery in Grundy Center. Memorials may be made to the American Cancer Society or to the Cedar Valley Hospice.

Donald was born on June 16, 1930 in Grundy County, Iowa, the son of Harm and Mattie (Meester) Stahl. He attended country school in Grundy County and later attended the Grundy Center School District, graduating from Grundy Center High School in 1948. He met Marjorie Ann Lynch while in school together and the two were united in marriage on August 21, 1952 at the family farm in Grundy County. The couple lived on a farm south of town and later welcomed two sons, Jerry and Alan. Donald worked as a carpenter and a farmer for most of his life. He was a member of the Colfax Presbyterian Church, enjoyed woodworking, playing cards and dominos, was an avid sports and Hawkeye fan and also enjoyed fishing and horseshoes.

Donald was preceded in death by his parents; wife Marjorie; sister Marlys Heyenga. 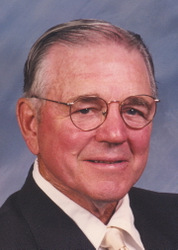