Henry was born February 21, 1913 near Fern Iowa the son of Frank and Trena (Cordes) Bergman. Hank attended county schools. He started farming early in his live and enjoyed it very much.

On February 14, 1940 he was united in marriage to Hermine Itzen Kiewiet in Holland, Iowa. They farmed near Holland, Iowa until they retired in 1976 and then made their home in Grundy Center. After retiring he still could not be kept away from the farm and made routine trips out to check the crops. He was a member of the American Lutheran Church in Grundy Center. Hank liked to tinker and make different gadgets to show his family. He liked to do woodworking and made different projects. Most of all Hank loved to spend time with family and friends.

He was preceded in death by his parents; wife: Hermine; and seven siblings. 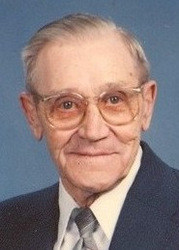