Dennis E. Katzer, 65, of Rural Conrad, Iowa died from natural causes on Tuesday, April 21, 2009 at the Marshalltown Medical and Surgical Center in Marshalltown, Iowa. Funeral services will be at 10:30 am on Saturday, April 25, at the United Methodist Church in Grundy Center, Iowa. Burial will follow in Rose Hill Cemetery. Visitation is from 5 pm to 8 pm on Friday at Engelkes-Abels Funeral Home in Grundy Center.

Dennis Edward Katzer was born May 3, 1943, in Eldora, Iowa, son of Raymond and Mildred (Beenken) Katzer. He lived his entire life on the family farm in Melrose township rural Conrad. He attended country school through the fifth grade then graduated from Grundy Center High School in 1961. He started farming with his father while still in high school.

He married Lois Johnson on Aug 7, 1966 at the Grundy Center United Methodist Church. Together they had two daughters, Marie and Brenda.

He was a member of the Grundy Center United Methodist Church, Grundy County Farm Bureau and the Conrad Lion's Club.

He loved his family and especially spending time with his children, grandchildren and his dog. His passion was farming, and he enjoyed feeding and watching the birds, and attending auctions.

He was preceded in death by his parents and brother, Dale Katzer. 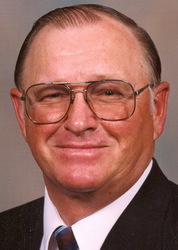