Edna Meester, 73, of Grundy Center, Iowa, died Tuesday, October, 25, 2005, at Grundy County Memorial Hospital in Grundy Center. Funeral services will be 1:30 P.M., Friday, October 28, 2005, at Pleasant Valley Reformed Church in Holland, Iowa, with Pastor Russell Muilenburg officiating. Burial will follow at Pleasant Valley Cemetery, rural Holland, Iowa. Visitation will be Thursday, October 27, 2005, from 4:00 P.M. to 8:00 P.M., at Engelkes-Abels Funeral Home in Grundy Center, Iowa, where the family will be present from 6:00 ? 8:00 to greet friends. A memorial fund has been established.

Edna was born October 14, 1932, in LaGarita, Colorado, the daughter of Mel and Victoria (Baca) Aguilar. She graduated from Sargent High School in Center, Colorado in 1951. She went on to receive her degree of Licensed Practical Nursing at St. Mary's in Pueblo, Colorado. She worked as an LPN at the hospital in Trinidad, Colorado and at St. Francis Hospital in Waterloo, Iowa.

On December 29, 1955, Edna was united in marriage to Harlyn D. Meester in Center, Colorado. The couple would have celebrated their 50th Wedding Anniversary this December. After their marriage the couple made their home in rural Holland where Edna was a loving mother and a farm wife. Edna and Harlyn moved to Grundy Center, Iowa in 2003. They have wintered in Lake Havasu City, Arizona the past fourteen years. Edna was a member of the Pleasant Valley Reformed Church, the American Legion Post #81 Auxiliary, and the Fraternal Order of Eagles #4299 in Lake Havasu City, Arizona.

She was preceded in death by her parents Mel and Victoria (Baca) Aguilar; brother: Tony Aguilar; and brother-in-law: Orlando Sandoval. 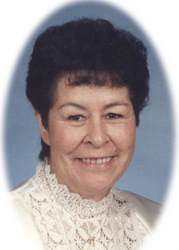