Allen "Lewie" Krull, 59, of Wellsburg, Iowa, died Tuesday, February 13, 2007, at Covenant Medical Center in Waterloo, Iowa. Funeral services will be 1:30 P.M., Saturday, February 17, 2007, at Colfax Center Presbyterian Church, rural Holland, Iowa, with Pastor Larry Hoop and Pastor Larry Doughan officiating. Burial will follow at Shiloh Cemetery in Wellsburg, with full military rites provided by the Wellsburg AMVETS Post No. 91 and the American Legion Post No. 213. Visitation will be Friday, February 16, 2007, from 5:00 P.M. to 8:00 P.M., at Doyen-Abels Funeral Home in Wellsburg. Visitation will also be Saturday from 9:00 A.M. to 11:00 A.M. at the funeral home. The family will be present on Friday evening to greet friends. A memorial fund has been established.

Allen Lewis Krull was born April 24, 1947, in Waterloo, Iowa, the son of Alfred E. and Helena (Koch) Krull. He was raised in Wellsburg, Iowa, and received his education from the Wellsburg Community School. He worked for the railroad and Snittjer Grain Company before being drafted into the United States Army on June 2, 1966. He served his country in Vietnam achieving a rank of Staff Sergeant in the Army Combat Engineers before being honorably discharged on March 27, 1968. Following his discharge from the service, he completed a course of study from Advance Schools, Inc. in Mobile Engine Service and Vehicle Maintenance. Lewie became a business owner and operator of an auto and truck repair shop in Wellsburg, known as A.L. Krull Repair.

On June 27, 1981, Lewie was united in marriage to Carol Lee Bakker at First Christian Reformed Church, rural Wellsburg. Following their marriage, they made their home in Wellsburg. They are the parents of two children, Danielle Leigh and Shane Allen. Lewie was a member of Colfax Center Presbyterian Church in America, rural Holland, Iowa, where he served as an Elder, Missions Fund Treasurer, Sunday School Teacher and attended Promise Keepers. In the past he served as a Calvinist Cadet Corps Counselor, Deacon, and member of the Timothy Christian School Board. Lewie was an active member of the Wellsburg AMVETS Post No. 91. He enjoyed fishing, gardening, reading, traveling, and spending time with his family. He was a very loving husband and father. Lewie and Carol celebrated their Silver Wedding Anniversary in 2006 by traveling to the East Coast.

He was preceded in death by his parents; one half-brother Larry Koch, and one sister Donna Krull. 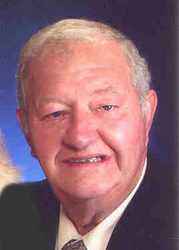