Eugene was born on April 19, 1929 to Herman and Etta Stoehr Ruter in Shiloh Township, Grundy Countywhere he lived and farmed for his entire life. A 1946 graduate of Wellsburg Community High School, Ruter was married to Thelma Okones at the Wellsburg Reformed Church on November 6, 1952. From 1948 to 1955, he served in the United States Army National Guard. He was formerly Deacon in the Wellsburg Reformed Church and President of the Wellsburg Community Club. Since 1978, he has sat on the Grundy County Planning and Zoning Commission and has served on occasion as its chairman.

Ruter is survived by wife Thelma, of Wellsburg; son Allan, daughter-in-law Jill (Mussay), and grandsons Karl and Edward Ruter, all of Glenview, Illinois; daughter Teresa and son-in-law Michael Kelly, of Iowa City, and grandsons Walter Kelly, of Iowa City, and James Kelly, of Vinton; sister Erma and brother-in-law Duane Meyer, of Marshalltown; brothers-in-law and wives Lee and Glenda (Harlan) Okones and Neil and Janice (Etjen) Okones, all of Wellsburg; aunts Emma (Ruter) deNeui, of Ackley, and Alice Ruter, of Wellsburg; ten nieces and nephews; and a host of relatives and friends.

He was preceded in death by his parents and a brother, Elmer. 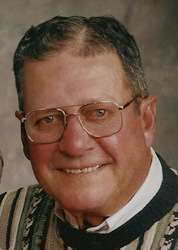