Edris Elizabeth Dreesman was born April 5, 1920, in Perry, Iowa, the daughter of George and Mary Etta (Caughey) Umbaugh. She married Glenn J. Dreesman on July 4, 1939, at the Ivester Church parsonage. Glenn and Edris lived in Marshalltown, Iowa, for several years but lived in the Grundy County area most of their lives. Edris worked as a janitor at the Lincoln Center Church for fourteen years until they moved to Grundy Center in 1965. She worked part-time in the Sheriffs office and as a cook at the high school.

Glenn and Edris enjoyed wintering in Texas for sixteen years until Glenn passed away on March 21, 1997. Edris always had a great sense of humor, loved music and spending time with her family and friends. She was a member of the Lincoln Center Christian Reformed Church.

She was preceded in death by her parents, two sisters, Vera and Letha; and five brothers, Lyle, Herman, Ernest, Gail, and Ronald Umbaugh. 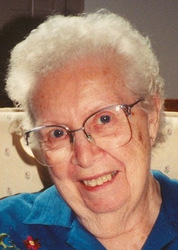