Louie was born August 2, 1916, in New Hartford, Iowa, son of Edwin and Lizzie (Ackerson) Sells. Louie was raised in the New Hartford area graduating from the New Hartford High School in 1934. On October 20, 1934 he was united in marriage to Paula Christiansen at Crookston, Minnesota. Louie worked as a hired hand on several farm before he worked for John Deere for 4 years. The couple started farming in 1947 and moved to a farm south of Grundy Center in 1948. Louie was a member of the American Lutheran Church.

He is survived by his wife, Paula; a daughter Shirley Ann Sells of Grundy Center, Iowa, a son Paul and his wife Carol Sells of Grundy Center, Iowa; 2 grandchildren Tiffany Gabbard of San Marcus, California, and Pam Sullivan of North Glen, Colorado; a great grandson Erik Sells and a great great granddaughter Kyra Sells; and one sister Evelyn Grandon of New Hartford, Iowa. 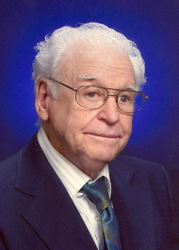