Don was born May 3, 1936, in Marshalltown, Iowa, the son of Donald Black and Gertrude Elizabeth (Skeie) Kliebenstein. He was raised in Gladbrook, Iowa, graduating from Gladbrook High School in 1953. He then attended the University of Iowa, graduating with his Bachelor's Degree in History in 1957. He furthered his education at the University of Iowa Law School, graduating with his Juris Doctorate Degree in 1961. On June 11, 1960, Don was united in marriage to Mary "Susie" Delfs at Peace Church in Gladbrook. They made their home in Grundy Center and Don assumed the law practice of Carroll E. (Jim) Engelkes. Don then became the Grundy County Attorney in 1965 and served in that capacity for thirty four years-making him the most senior county prosecutor in the state. During this time, Don also became partners in private practice with T.J. Heronimus, Kirby D. Schmidt, Todd Geer, and Bradley J. Harris. Don retired in 2005, after practicing law for forty-four years.

Don was a member of the United Methodist Church in Grundy Center, a member of the Grundy National Bank Board for over thirty years, and a member of the Iowa State Bar. He was an avid Iowa Hawkeye Fan and looked forward to the Drake Relays every year. Don also loved learning about history-especially the civil war.

He is survived by his wife, Mary "Susie" Kliebenstein of Grundy Center, Iowa; one daughter Julie Farley and her husband Michael of Mendota Heights, Minnesota; two granddaughters, Heather Farley and Mary Catherine Farley; and one sister, Ann Hansen and her husband Duane of Lincoln, California.

He was preceded in death by his parents; and one son Jeff Kliebenstein. 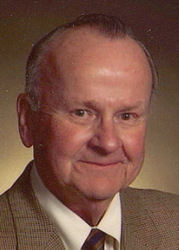